The Alexis Minotis Bequest in Memory of Katina Paxinou was the wish of Alexis Minotis and was created in accordance with the terms set out by him in his Will. The Bequest is an independent management fund which is supervised jointly by the Ministries of Finance, Education and Culture.

As a trustee of the Bequest, the Foundation annually declares scholarships in Greece and abroad for students specializing in the art of theatre, as well as theatre technicians who wish to pursue further training abroad. In addition, in accordance with the conditions set by the testator Alexis Minotis, the Foundation publishes studies on the history and theory of theatre, as well as

translations of classic plays on behalf of the Bequest.

Amongst the other obligations of the Bequest was the creation of a hall to house memorabilia of the life and career of Katina Paxinou, along with her archive and books. The Board of Directors of MIET gratefully accepted this generous offer and within a short time fulfilled the testator's wish. Following the death of Alexis Minotis, his archive, books and personal effects also came into the possession of MIET. As a result, the initial Paxinou hall was expanded, enriched and renamed the Paxinou-Minotis Museum. 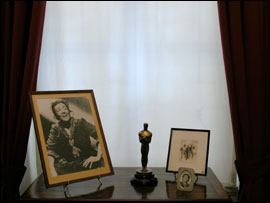 On entering the Museum, the visitor feels that he is entering the couple's personal space, which is warm and full of memories. Their furniture, Paxinou's dressing room with its mirrors, make-up brushes, jewellery from her theatrical roles — the whole preparation for a performance. Next are costumes of cherished roles from historical performances: Oedipus Rex, Hamlet.

The space is brimful of memories: Photographs of near legendary performances, paintings, a portrait of Paxinou by Tsarouchis inspired by Lorca's Blood Wedding, the fan created by the same artist for The House of Bernarda Alba, and personal objects. Also on display are embroideries crafted by Paxinou, medals and honorary diplomas for the artistic contribution of the two leading actors, and the Oscar awarded to the great actress for her part as Pilar in the film For Whom the Bell Tolls.

Although full of theatre and mementos, the Paxinou-Minotis Museum remains functional. Slide projections on the theatrical life of the two leading actors are included in school and student visits.

Visits to the Paxinou-Minotis Museum and Archive, housed in the Eynard Mansion at 20 Agiou Konstantinou & 52 Menandrou Streets, are made by appointment only.