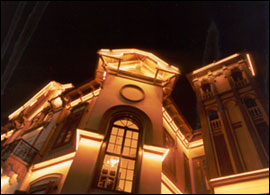 In addition, the Centre liaised with other cultural institutions to mount literary, historical and art exhibitions, held lectures and courses on historical topography, and published catalogues accompanying these events. One of the most important and long-standing collaborations was with the Mount Athos Photographic Archive, which led to the organization of four exhibitions with photographs of great historical and artistic value.

In 1997, the National Bank of Greece subsumed its cultural centres in Athens, Thessaloniki and Patras under the Cultural Foundation of the National Bank of Greece (MIET). Since then, the Cultural Centre of Thessaloniki has been expanding its activities mainly through art exhibitions. In 1997, the year it was subsumed under MIET, the Centre collaborated with the organization Thessaloniki Cultural Capital of Europe 1997 in mounting important exhibitions (Francisco Goya, Albin Brunovski).

The Centre's policy from the outset has been to facilitate cultural bodies in Thessaloniki that do not have the space required to develop their activities. In this respect, since 1994 the Centre has co-operated with the major international photographic event "Photosynkyria" and has hosted exhibitions of work by distinguished Greek and foreign photographers.

To date, the Centre has organized exhibitions jointly with the Thessaloniki branches of the French Institute, the Goethe Institute and the British Council, the "Christos Kalemkeris" Photography Museum in Kalamaria, the Thessaloniki Contemporary Art Centre, the Benaki Museum, as well as the Albert-Kahn Museum (Paris).

Apart from its function as an exhibitions venue, the Centre also hosts lectures, in line with either its exhibition activities or the publications of MIET, as well as projections of slides, videos and films. In addition, since February 2000 the Centre runs a bookshop, which stocks all the publications of the Foundation, the National Bank and its Historical Archive.

The Centre uses all available means to promote its activities to a wide section of the public. It places particular emphasis on attracting young people, in collaboration with the Inspectorates of Primary and Secondary Education, as well as the Humanities departments of the Aristotle University of Thessaloniki and the University of Macedonia.

The Thessaloniki Cultural Centre of MIET is privileged to be housed in a unique early twentieth-century building, one of the few surviving villas of old Thessaloniki, which has been linked over the years with people and events that have left their mark on the city's history. It stands in what was known as the Exochon Quarter, which was formed extra muros of the old city, in the late nineteenth century, following the gradual demolition of the east and sea wall, and especially after the destructive fire of 1890. During the interwar years, the Exochon Quarter ceased to be a holiday resort, and the luxurious villas there served a different purpose. After the end of the Second World War, most of the villas were pulled down and apartment blocks were built in their place.

The building was initially owned by the old-established Kapantzis family, whose presence in the city can be traced back to the late eighteenth century, when they figured prominently in the guild system. The Villa Kapantzis, as it was named, was particularly lavish and the construction costs exceeded 40,000 gold sovereigns, a mythical amount in those days.